Pete Dances with the Ballroom Boys at Lichfield Garrick 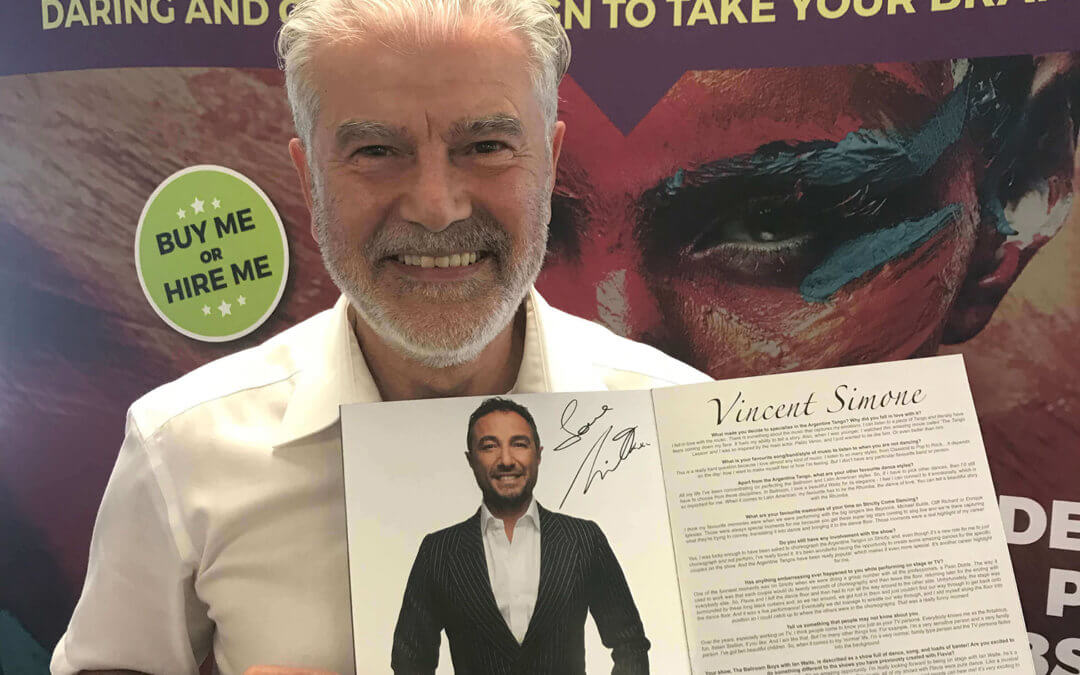 Surely there can be no better way to spend a Saturday afternoon than seeing ‘The Ballroom Boys’, Vincent Simone and Ian Waite. Pete and Clare from the Raphael Team, along with Clare’s Mum Kate, went along to their matinee performance on Saturday 18th May at Lichfield Garrick. And what a brilliant time they all had.

The show was a sell out and deservedly so. For over two hours the audience was treated to a fantastic selection of dancing and singing plus some very entertaining banter between the two Strictly dancers. Their dancing partners Crystal Main and Ksenia Zsikhotska supported Ian and Vincent brilliantly. Plus vocalist James Lomas is a real find. He has a beautiful voice, singing so many classics and some modern tunes too. Particular highlights were Ian and Crystal’s Salsa and Vincent performing the Argentine Tango with Ksenia. As for the ballet piece, it was absolutely hilarious!!!

Audience participation was encouraged throughout the afternoon. At one stage, Pete and three other volunteers took to the stage with Vincent and Ian. Unwittingly Pete made quite an impression on Vincent, as there was a striking resemblance between them. Pete is half Italian and of course Vincent is the original ‘Italian Stallion’ so maybe there are some common genes somewhere along the line! In turn each of the brave volunteers had to impersonate pop legends with the supplied props. Everybody threw himself or herself into the task in hand and the audience was treated to great impressions of Elton John, Madonna and Freddie Mercury. Pete was last to go and dressed in a spiky Tina Turner wig, which actually suited him rather well, he rocked to ‘Proud Mary’.

At the end of the impressions the audience were asked to select their favourite and this resulted in Pete being voted ‘simply the best’. His reward for this accolade was receiving a programme signed by all the members of the cast. As a dedicated Strictly fan, Clare was probably more excited by this prize than Pete! But at least he has a great tale to tell about the afternoon he played to a full house at the Garrick with Vincent and Ian!

All in all it was a fantastic afternoon of fun. The standing ovation given to the whole cast at the end of the show was well deserved and indicated how much everyone had enjoyed the performance. Though it’s stay at the Lichfield Garrick is now over, the Ballroom Boys tour continues, and it is well worth going to see if tickets are still available. To find out more go to https://www.theballroomboys.com/tickets

As for Pete, he has currently decided that a change of career to a Tina Turner or Vincent Simone lookalike are not for him for now, so it is back to business as usual at Raphael Design!